Innovation and Sacrifice: Enduring Values from a Vintage WWII Ad

Over Memorial Day weekend, we found something fascinating in the Sloan archives we wanted to share with our readers. This 1942 ad for the Sloan “Victory” valve reflects the sacrifice that was a hallmark of the World War II era—but also the spirit of innovation fueled by that sacrifice.

As a tribute to the men and women of that era who helped our nation survive the war and prosper in its aftermath, we’d like to share the full text of the ad and discuss what it still means to our company today.

“The War Department Specification (PE-623) and Federal Specification (E.WW.P.541a) permit the use of 2¼ lbs. of copper-base alloy, and the Sloan Valve Company has complied with these specifications since their inception in June and July 1942. However—fully realizing the need for critical copper in the war program, Sloan engineers greatly bettered this limit. The new Victory valve uses less than four ounces of copper—which, based on present production, means an annual savings of 4,406,000 lbs.” 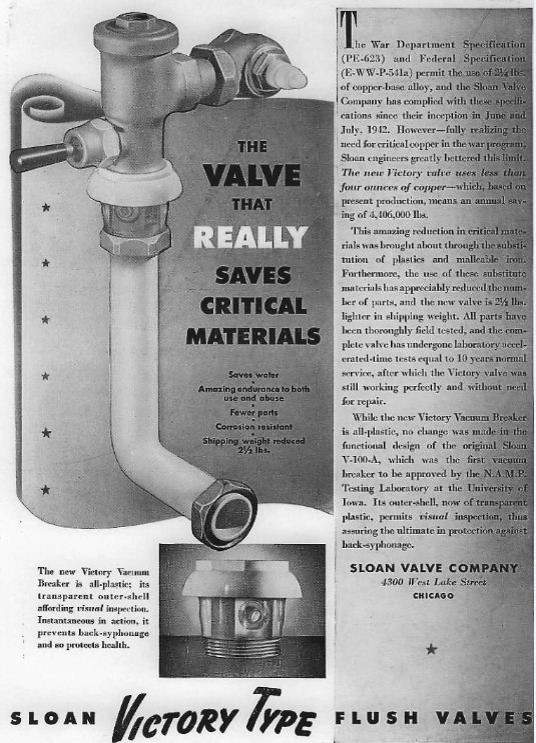 Key resources were in short supply throughout WWII, so producing valves with less than 11% of the copper permitted is a testament to the patriotism and ingenuity of Sloan’s wartime engineers. Copper use was limited because the military needed so much of it for wiring—for machinery, aircraft and radios—and shell casings.

“This amazing reduction in critical materials was brought about through the substitution of plastics and malleable iron. Furthermore, the use of these substitute materials has appreciably reduced the number of parts, and the new valve is 2½ lbs. lighter in shipping weight. All parts have been thoroughly field tested, and the complete valve has undergone laboratory-accelerated time tests equal to 10 years normal service, after which the Victory Valve was still working perfectly and without need for repair.”

A lighter shipping weight helped preserve gasoline—another wartime resource rationed to preserve as much as possible for the war effort.

“While the new Victory Vacuum Breaker is all-plastic, no change was made in the functional design of the original Sloan V-100-A, which was the first vacuum breaker to be approved by the N.A.M.F. testing laboratory at the University of Iowa. Its outer-shell, now of transparent plastic, permits visual inspection, thus assuring the ultimate in protection against back-siphonage.”

Transparent plastic, now ubiquitous, was leading-edge technology 75 years ago. We’re proud that Sloan engineers not only applied this new technology to an existing application but subjected it to the most rigorous tests available. That’s the way we operate today, too.

More than Just One Valve

Like many American companies at the time, Sloan transformed its industrial capacity to produce vital materials for fighting the war. Much of the Sloan factory was retooled to produce detonators and fuses for artillery shells.

And “Rosie the Riveter” was very much a reality at Sloan during the war. With most men overseas fighting, our machines and shop floor were run primarily by women—who eventually comprised 85% of Sloan’s workforce.

The Sloan Valve Company did everything it could to support the war effort because our freedom and our way of life depended on it. We’re proud to inherit that legacy of innovation and sacrifice, and we make sure it permeates every product we sell to this day.

Since the introduction of the modern flushometer in 1906, Sloan innovations have saved building owners billions of gallons of water. For more water-saving ideas and continued learning resources, talk to Sloan!