Commercial Restroom Reflections: Safeguarding Your Building Ahead of Re-opening

As commercial buildings begin to re-open from shutdowns related to the COVID-19 pandemic, it’s important for building managers to follow the proper protocols when flushing out a building’s water systems. That’s because water left in plumbing lines for an extended period of time becomes stagnant, posing significant safety risks. A number of Sloan in-house experts outline the importance of the water purging process in commercial buildings, and how to do so safely and effectively.

The COVID-19 pandemic has resulted in widespread building shutdowns and low occupancy rates in buildings across the globe. As buildings begin to re-open, it is paramount for these facilities to properly flush out buildings’ water systems to introduce fresh potable water into the system and reduce the serious water safety risks that are associated with stagnant water.

Municipal drinking water treatment plants add small amounts of disinfectant to keep bacteria from growing, but these chemicals degrade over time while the water sits idle in unused plumbing systems. Waterborne pathogens, like Legionella, thrive in this warm and still environment, and heavy metals can slowly leach out of aging pipes, too. This increases the risk of exposing occupants to illnesses in schools, offices, and other buildings with water that may have sat idle for the past few months.

Why is it important to remove aerators before purging water from faucets?

It’s crucial to either remove the aerators before or immediately after the purging process for a few reasons. During the purging process, any debris that is in the water may become lodged in the aerator and can block the process from being completed properly. Additionally, it’s also important to remove aerators so they can either be replaced or cleaned and disinfected from anything that might be on those spray heads.

How is technology working to make the purge process safer and easier?

The Sloan Connect app and products with an automatic line purge feature help to keep water moving through the plumbing lines even if users are in the building or using that particular product frequently. Having products like these makes the re-opening process safer and easier because they lessen the risk of microbiotic growth in standing water. If a building is closed for an extended period of time, it is important to wear proper personal protective equipment and follow the guidelines for restarting properly, but these products make it safer for the workers that are tasked with re-opening those buildings.

Why is it important to start purging water closets and urinals that are located the farthest from branch lines in the restroom?

As water moves rapidly through a water closet outlet, it causes churning and dislodged sediment upstream. To thoroughly push any large sediment out, you want to start at the farthest point upstream of the purging fittings (branch line feed) on the supply and work your way to the most extreme distance. This way you are ending with the farthest fitting and getting any incomplete dislodged sediment out through the last fixture.

The idea of purging a system is to pass through as many harmful particles and sediment that can loosen up in the high flowing piping feeding flushometers and faucets, so when the actual building’s plumbing system becomes in full demand, the occurrence of leaks and run-ons caused by large debris can be reduced.

Why should pressure-assisted and tank type toilets be flushed more often than traditional toilets when preparing to re-open?

A pressure-assisted toilet has an inlet filter mesh screen, leaving it more susceptible to clogging by larger debris than a traditional gravity toilet. The filter will protect the toilet’s internals, but would have to be cleaned more frequently if purging was not performed adequately.

As some businesses go back and forth from re-opening to closing again, how long does a building need to be closed for to consider purging the water lines? 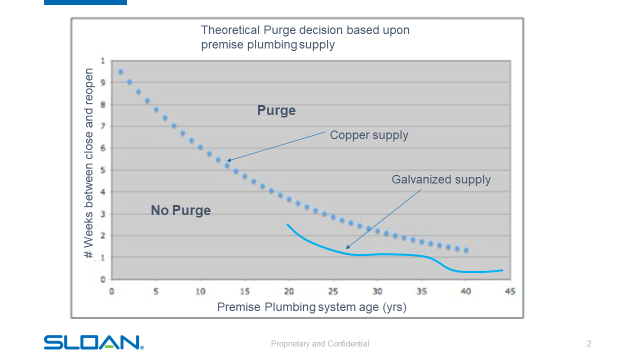 This is the 19h edition in a series of Q&A segments with Sloan leadership and subject matter experts for their take on where the commercial restroom has been, what it’s evolved to now, and where it’s headed. A previous edition—and Sloan’s first podcast in this series—on the impact of touch-free on health and wellness can be found here.