Sloan Celebrates Earth Day with More Than One Billion People

On Earth Day, more than one billion people in 192 countries took action to protect our shared environment. All across the globe, in big cities to small villages people organized to demand climate action, clean up their local communities, meet with their elected officials, plant trees and teach their children to protect our planet.

The first Earth Day was held on April 22, 1970 and is widely credited with launching the modern environmental movement. Growing out of the first Earth Day, the Earth Day Network works with tens of thousands of partners in 192 countries to broaden, diversify and mobilize the environmental movement. More than one billion people now participate in Earth Day activities each year, making it the largest civic observance in the world. 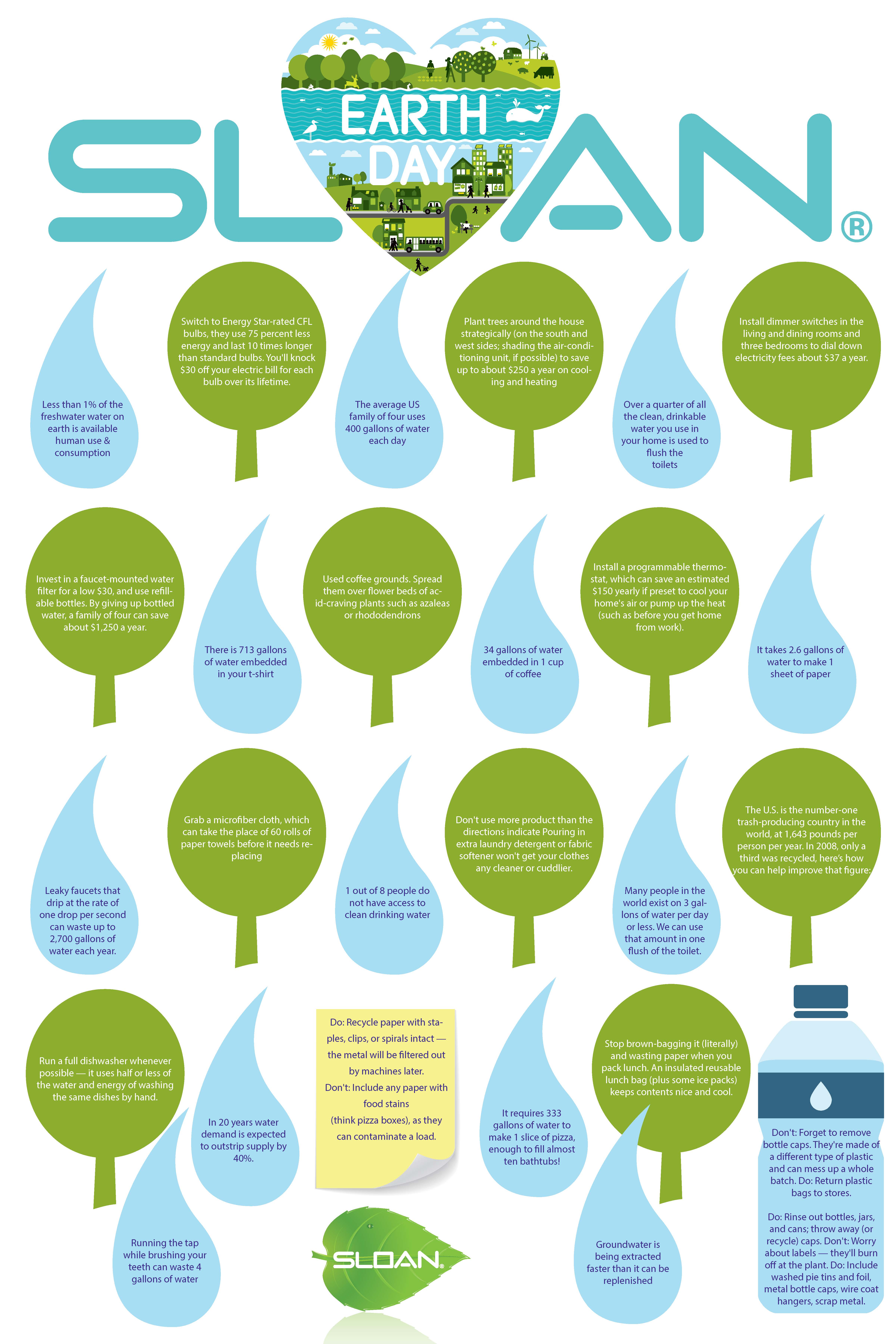 As of 2015, the total was estimated to be around 6,300 million metric tons. Of that, a staggering 79% accumulates in landfills and the environment. The plastic makes its way to the ocean where it traps and is eaten by marine animals. You may have heard of the Great Pacific garbage patch. In the oceans, the plastic continually breaks into smaller and smaller pieces until it can enter the blood stream of fish and other organisms, bringing along the toxins it has absorbed.

Last year, Sloan’s Franklin Park headquarters implemented a plastic bottle free initiative effectively eliminating the use of over 18,000 plastic bottles this year! This program will be rolled out and implemented to all of our North American operations throughout the rest of 2018.

Additionally our Franklin Park manufacturing facility has incorporated recycling practices to capture most of the plastic materials generated from the manufacturing processes. As a result, Sloan diverted an additional 13 tons of material from the landfill last year and increased recycling by almost 23 tons in comparison to 2016.

Another program introduced at Sloan last Earth Day was the unwanted medication takeback program to dispose of unwanted prescription and non-prescription medication in a safe and environmentally responsible fashion.

Why is Sloan providing this service to our employees? Recent studies have found that medicines flushed down the toilet can contaminate our lakes and streams, which can hurt fish and other aquatic wildlife and ultimately end up in our drinking water. A study conducted by the U.S. Geological Survey found measurable amounts of one or more medications in 80% of the water samples drawn from a network of 139 streams in 30 states. The drugs identified included a witches' brew of antibiotics, antidepressants, blood thinners, heart medications, hormones and painkillers. All medication collected has been transported to a local DEA approved collection center and to date we have collected and safely disposed of over 50 pounds of unwanted prescription and non-prescription medication.

Sloan Products are Built with Conservation in Mind

Sloan products are also built with conservation in mind, from the material that composes them to the technology they’re engineered on. Sloan flushometers are made of 99 percent reclaimed brass taken from old car radiators and other plumbing materials, while Sloan flushometers and faucets are lowering water consumption by up to 30 percent. In fact, our standard waterfree urinals eliminate water consumption altogether and conserve up to 40,000 gallons of water each year.

A vast majority of these products are designed with transparency in mind, as Sloan has published Environmental Product Declarations (EPD), Health Product Declarations (HPD) and Declare labels for many of our popular high efficient commercial restroom products. These reports publicly ‘declare’ the life-cycle sustainability of our products based on the inclusion of environment- and occupant-friendly materials and chemicals. And did you know that Sloan offers the widest breadth of EPD’s and HPD’s in the commercial plumbing industry.

Sloan recently furthered that commitment to transparency and sustainability by issuing a series of carbon neutral products, while offsetting our carbon usage with forestry credits through a partnership with the Arbor Day Foundation. These certified carbon neutral products are also the only of its kind in the plumbing industry.

Earth Day started the global environmentalism movement back in 1970. Sloan has been passionately protecting the environment since 1906. Just one of the reasons why Sloan is known as the global leader most renowned for providing smart, clean, sustainable restroom solutions.

From the 1906 invention of the Royal® Flushometer to today’s automatic fixtures, Sloan’s innovations have saved building owners billions of gallons of water. Want to know more? Talk to Sloan!