Most pro teams are named after the city where they’re based. Some are named for states—the Colorado Rockies come to mind—and others for regions, like the New England Patriots. The Warriors, however, are the only major professional team in the U.S. to have a state’s nickname as part of their name.

The team adopted the unusual moniker in 1971 to help unify regional support behind the Warriors after moving from San Francisco to Oakland. (They had previously moved from Philadelphia in 1962.) They’ve since become one of sports’ most iconic brands, winning three NBA championships this decade with an up-tempo, crowd-pleasing style.

This season, moving back across the Bay to a spectacular new home in San Francisco’s Chase Center, the “Golden State” branding seems especially appropriate. Chase Center combines style and sustainability in a uniquely California way. It’s “Golden State” in every respect.

We’re proud that Sloan products are the stars in Chase Center’s restrooms. Here’s a closer look.

In keeping with the recent trend toward green sports facilities, Chase Center has been designed to be environmentally friendly in every way possible. It’s on track to achieve LEED Gold certification from the U.S. Green Building Council (USGBC).

Its sustainable measures include:

Finally, Chase Center recovers graywater from restrooms and showers and even harvests stormwater from the roof. This reclaimed water is then treated on-site before being returned for use in restroom flush fixtures.

Reclaimed water? That’s one of our specialties!

San Francisco has some of the most progressive building codes in the nation, requiring property owners to install recycled water systems in new construction to any building totaling 40,000 square feet or more. 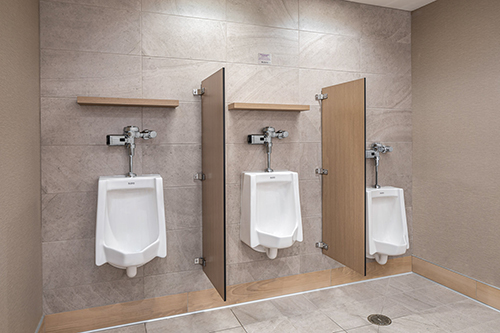 Using reclaimed water instead of fresh water will save Chase Center millions of gallons each year, but ordinary flushometers can’t endure the higher chemical concentrations of reclaimed water. Our Royal® 111-1.28 SFSM and Royal 186-0.125 SFSM Sensor Flushometers are engineered to withstand the harsh conditions reclaimed water presents to deliver Sloan performance for decades.

Sustainability wasn’t the only priority for Chase Center—style was important, too.

Our Brushed Nickel finish isn’t just first-glance beautiful, either—its Physical Vapor Deposition (PVD) properties keep fingerprints and watermarks away, even during the hundreds of uses each product endures during a game.

Whether it’s the beauty of the building or the impact of its sustainability measures, Chase Center is dazzling fans and setting a new standard for sports arenas. It’s a one-of-a-kind facility from a franchise that’s always played by its own unique style.

Sloan technology has contributed to the construction and renovation of many of the world’s premier sports and entertainment facilities. Want ideas for making your next event venue more stylish and water-efficient? Talk to Sloan!